As I sat down to write East: A Woman on the Road to Kathmandu, chance delivered an incredible surprise. After finishing 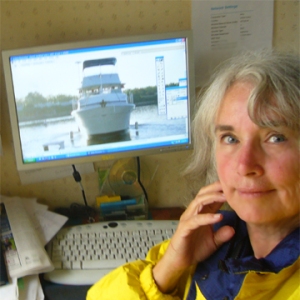 writing my first book and taking Floating Point to a series of readings and events, I turned to another I had meant to write for 40 years – an account of a distant past in which I confronted my terror of traveling alone and set forth on a journey I hoped would take me to India and Kathmandu, using mostly public transit.

As I assembled my own notes, photographs, and intense memories, I also hunted, as I had done many times earlier, for the guidebook I bought at Cody’s bookstore in Berkeley so long ago that had inspired me to launch that journey. Once again, I learned that Overland to India was out of print. But this time I found something else as well: A rough used copy was available.

On examination, my purchase, when it arrived, was truly in less than perfect shape. The cream cover was travel-stained and pen-marked; the spine was cracked. Inside, I could see arrows marking up the margins of the pages. Some text passages were underlined. In a different handwriting, someone using purple ink had scribbled a web address in a margin. On the cover, somebody had written:

“THIS IS AN INTERESTING BOOK BUT DON’T PAY ATTENTION TO ANY FACTS IN IT, OR HIS OPINIONS even so . . . IT IS NEAT.”

Ironically, I had paid attention. Overland to India, published the year before I set out, had contained a great deal of valuable and hard-to-come-by information. The author’s hints for cost-cutting were sometimes dodgy, and some of the information already needed updating by the time of my journey. However, for the most part, the advice about trains, buses, visas, and cheap hotels had been sound. There had been few other guidebooks available at the time. 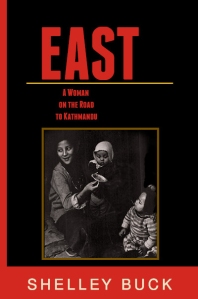 Now I held a copy of it again. I looked more closely at the words written across the cover. Who would violate a book that way? The printing was a strange mixture of lower case and capital letters and ellipsis marks – the kind of hasty inscription some person might jot down when casually giving a book away – someone whose cursive writing was illegible. I knew this because my own handwriting is awful.
Suddenly, I stared hard. This printing looked familiar. Very familiar! On the pages inside the book, the odd arrows in the margins, pointing to bits of text, were also made the way I draw them.

I felt sick. I don’t like coincidences. And then I felt a whooping excitement. This was my own book! The seller put me in touch with the person she had gotten the book from – a fellow of the Royal Geographical Society.

Another journey was beginning. Maybe that, too, will someday become a book.

The adventure chronicled in East, however, is of my initial journey. The facts are as I recollect them. It began in Oakland during the Vietnam War era – a messy and unstable period in American history. I set off alone at a time when women increasingly were probing the relationship between the personal and the political. As I traveled, the adventure evolved into a quest to discover both the world and myself. I know now that all journeys can unfold this way, if we let them. This too is an understanding I would come to along the way.

Back then, the journey seemed to me an impossible one for a woman to undertake at all. By now, the overland route has become impossible to most Western travelers – male or female. Wars, insurgencies and altered governments have rendered some countries along the way either dangerous or unreachable. I could not forsee that what seemed like a closed door to me as a 1970s woman traveler should appear in retrospect as such a rare and open one – a brief and special time when the young and daring could pass through much-disputed lands in relative peace.

This book celebrates that open door. East celebrates my friends in farflung places, my companions of the road, and well-meaning adventurers everywhere. The story is a true one. Not everyone is brought up brave, but some of us, by following a dream, and exceeding the boundaries set for us, may become bolder.

Shelley Buck will be appearing at Village House of Books on May 2nd at 3:00 pm as part of our California Bookstore Day celebration! Come say hello to Shelley and our other local authors that we will be featuring throughout the day!